By George Jahn and Bradley Klapper, Associated Press
VIENNA (AP) -- The U.N. nuclear agency certified Saturday that Iran has met all of its commitments under last summer's landmark nuclear deal, crowning years of U.S.-led efforts to crimp Iran's ability to make atomic weapons. For Iran, the move lifts Western economic sanctions that have been in place for years, unlocking access to $100 billion in frozen assets and unleashing new opportunities for its battered economy.
U.S. Secretary of State John Kerry, left, meets with Iranian Foreign Minister Mohammad Javad Zarif, right, in Vienna, Austria, Saturday, Jan. 16, 2016, on what is expected to be "implementation day," the day the International Atomic Energy Agency (IAEA) verifies that Iran has met all conditions under the nuclear deal. (Kevin Lamarque/Pool Photo via AP)

* * * U.S. Secretary of State John Kerry and the top diplomats of Iran and the European Union hailed the accord, reached after years of setbacks and a full decade after the start of international diplomacy aimed at reducing the possibility that Tehran could turn its nuclear programs to weapons making.
"Today marks the first day of a safer world," Kerry declared in Vienna. "This evening, we are really reminded once again of diplomacy's power to tackle significant challenges."
Additionally, Kerry linked the trust built between Iran and the United States over the past two years of talks to the release by Iran Saturday of four Americans who also hold Iranian nationality.
"Thanks to years of hard work and committed dialogue," he said, "we have made vital breakthroughs related to both the nuclear negotiations and a separate long-term diplomatic effort" that led to the freeing of the Americans.

Iranian President Hassan Rouhani arrives for a meeting with U.N. nuclear chief Yukiya Amano, left, during their meeting in Tehran, Iran, Sunday, Sept. 20, 2015. Iran's state TV reported Amano arrived in Tehran Sunday to "clarify past and current issues" of the country's nuclear program. Iran and the world powers have agreed to a landmark deal that curbs Iran's nuclear program in return for the lifting of international economic sanctions. (AP Photo/Vahid Salemi)

* * * EU Foreign Policy chief Federica Mogherini — in a statement also read in Farsi by Iranian Foreign Minister Mohammad Jawad Zarif — said the accord "demonstrates that with political will, perseverance, and through multilateral diplomacy, we can solve the most difficult issues and find practical solutions that are effectively implemented."
In Washington, U.S. President Barack Obama signed executive orders lifting economic sanctions on Iran, while Kerry confirmed that the U.N.'s International Atomic Energy Agency could verify that "Iran has fully implemented its required commitments."
The July 14 deal, struck after decades of hostility, defused the likelihood of U.S. or Israeli military action against Iran while creating an opening for future cooperation on calming the tumultuous Middle East. But proof that it had been fully implemented had been lacking until Saturday.
For Tehran, the report translates into a huge financial windfall while also helping its efforts at international image rehabilitation.
Beyond sanctions lifting and the unlocking of frozen assets, certification by the IAEA opens the path to new oil, trade and financial opportunities that could prove far more valuable for Tehran in the long run. 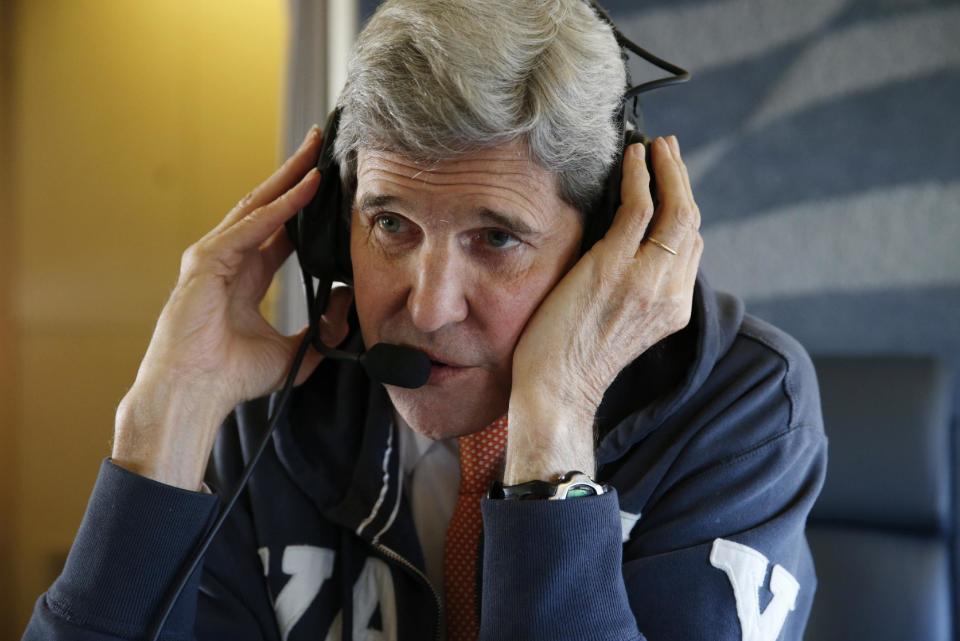 U.S. Secretary of State, John Kerry, communicates from aboard his plane Saturday, Jan. 16, 2016, on his way to Vienna, Austria on what is expected to be "implementation day," the day the International Atomic Energy Agency (IAEA) verifies that Iran has met all conditions under the nuclear deal. (Kevin Lamarque/Pool Photo via AP)

* * * Not even waiting for the IAEA report, Iranian Transport Minister Abbas Akhondi said his country had reached a deal with the European consortium Airbus to buy 114 passenger planes once the sanctions are lifted.
As diplomatic maneuvering on the nuclear issue dragged into the night, another source of U.S.-Iranian tension moved toward resolution with officials of both nations announcing the prisoner releases. The four Americans imprisoned in Iran were exchanged for seven Iranians held or charged in the United States.
U.S. officials said the four — Washington Post reporter Jason Rezaian, former U.S. Marine Amir Hekmati, pastor Saeed Abedini and Nosratollah Khosravi-Roodsari — were to be flown from Iran to Switzerland on a Swiss plane and then brought to a U.S. military hospital in Landstuhl, Germany, for medical treatment.
In return, the U.S. will either pardon or drop charges against seven Iranians — six of them dual citizens — accused or convicted of violating U.S. sanctions. The U.S. will also drop Interpol "red notices" — essentially arrest warrants — on a handful of sought Iranian fugitives.
Rezaian is a dual Iran-U.S. citizen convicted of espionage by Iran in a closed-door trial in 2015. The Post and the U.S. government have denied the accusations, as has Rezaian. He had been held more than 543 days.

* * * U.S. officials said a fifth American detained in Iran, a student, has been released in a move unrelated to the prisoner swap. They said the student, identified as Matthew Trevithick, was already on his way home.
Among the sanctions lifted will be those imposed between 2006 and 2010 by the U.N. Security Council as it attempted to pressure the Islamic Republic to curb uranium enrichment and other activities that could also be used for nuclear weapons. Iran sees that move and the recent closure of a decade-long investigation of whether it worked on such weapons as a formal end to the allegations against it.
But the deal is also a boon for the White House. U.S. President Barack Obama's greatest foreign policy triumph, it has turned tensions into a first step toward cooperation with Iran, a major regional power instrumental for ending the Syrian conflict and other Middle East crises.
The July 14 deal with six world powers puts Iran's various nuclear activities under IAEA watch for up to 15 years, with an option to re-impose sanctions should Tehran break its commitments.
It aims to increase the time Iran would need to make enough fissile material for a nuclear weapon from several months to a year, primarily by capping Tehran's ability to enrich uranium, which can create material ranging from reactor fuel to warhead material. Under the deal, Iran committed to reduce its operating centrifuges enriching uranium by two-thirds, to just over 5,000 machines. 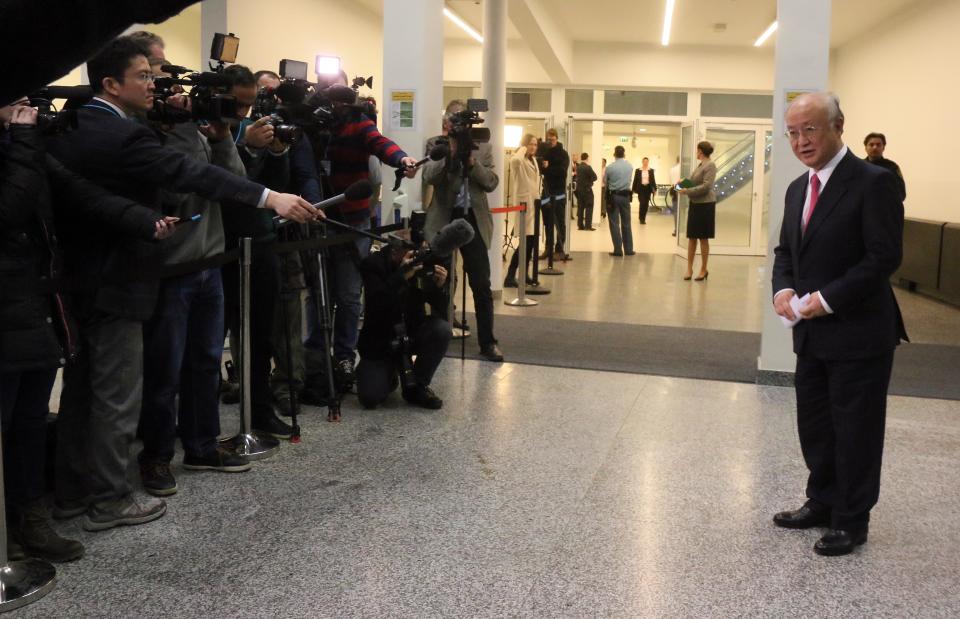 * * * The IAEA report, obtained by The Associated Press, ticked off that commitment and others as met.
With news of the deal's implementation breaking long after midnight in Tehran, there was no repeat of the boisterous street celebrations that met agreement in July on the accord. But social media networking sites were abuzz.
"Hello to life without sanctions," said one message. Another praised both Zarif and Iranian President Hassan Rouhani, whose taking office in 2013 led to the start of serious negotiations after years of essential deadlock. "Thank you Rouhani," one said. "Thank you Zarif."
Since the world's attention focused on Iran's nuclear program more than a decade ago with revelations of its secret uranium enrichment program, Tehran has insisted that it was working only to power a future network of reactors and on medical and scientific research.
Iran denied any work or interest in nuclear arms even after the IAEA closed a prolonged probe with a November assessment that Tehran had an organized research and development program into such weapons up to 2003 and more scattered research and development activities up to 2009. 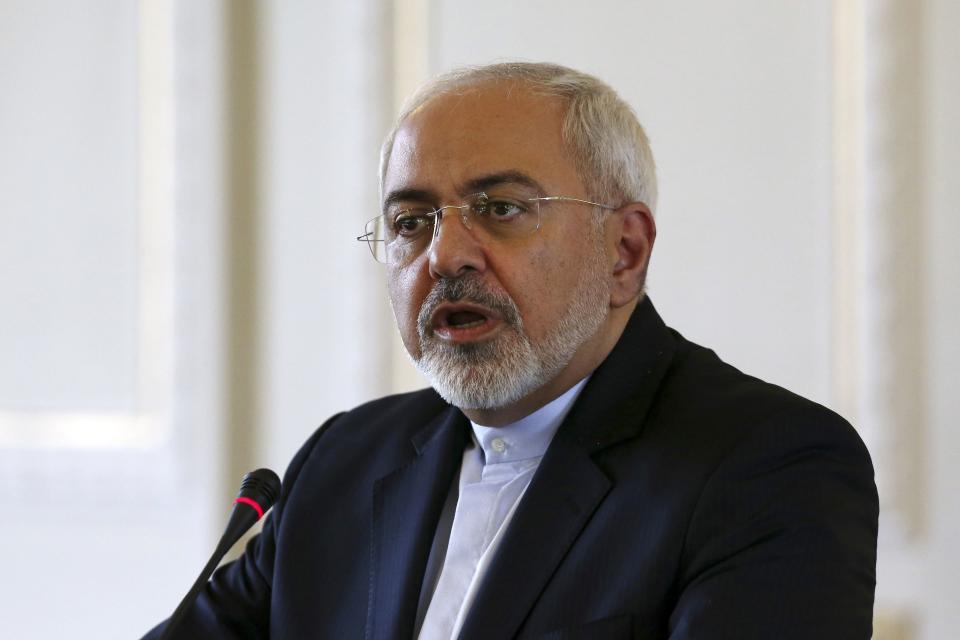 * * * Still, it had little choice but to negotiate an end to the conflict after years of seeing as its revenues from oil sales — its chief income — dry up due to increasing U.S., European Union and other sanctions.
But the talks turned serious only after the pragmatic Rouhani took office in 2013.
For years, Washington had refused to even sit at the same table with Iran, joining the nuclear talks only in 2008, five years after the first international attempts to negotiate a deal.
By the fall of 2013, however, Kerry had met with his Iranian counterpart and Obama had called Rouhani in what was the first direct communication between a U.S. and Iranian president since the 1979 Islamic revolution led to the U.S. Embassy hostage taking and a diplomatic freeze.
The public goodwill quickly faded, however, and the realities of negotiating a mutually acceptable deal sank in. Deadlines were repeatedly extended by months. 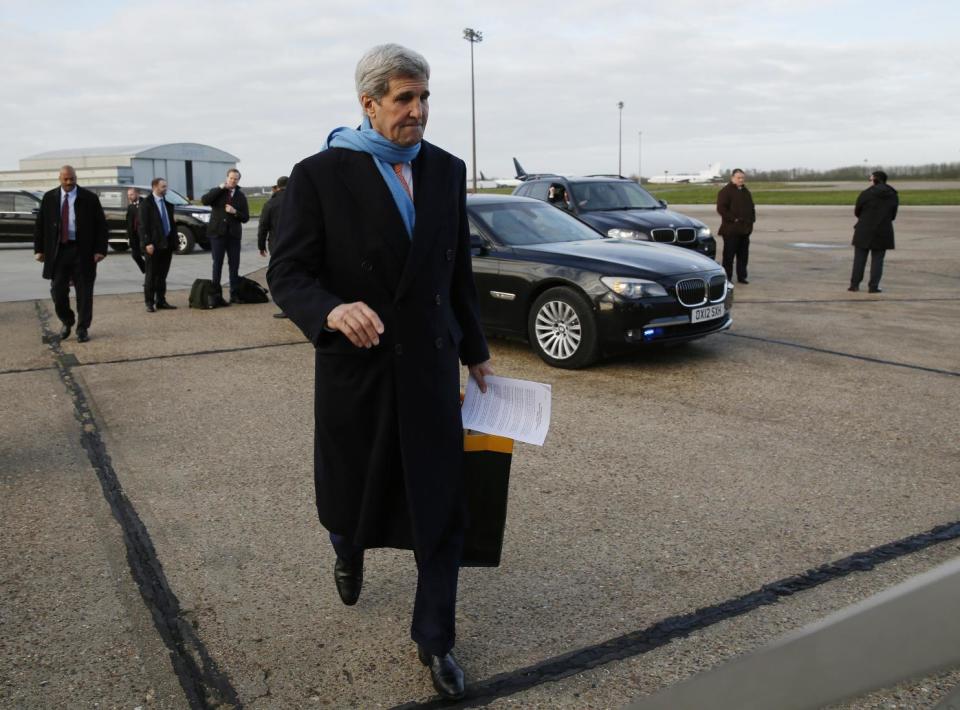 U.S. Secretary of State, John Kerry, departs London on his way to Vienna, Austria for what is expected to be "implementation day" of the Iran nuclear deal following the release of the final report issued by the International Atomic Energy Agency (IAEA) Saturday, Jan. 16, 2016. (Kevin Lamarque/Pool Photo via AP)

* * * The bickering went on to the very end, with the July 14 agreement emerging only after a series of white-knuckle late and overnight sessions, punctuated by threats from both sides to walk away from the table.
Both sides took hits amid the diplomatic maneuvering — Iran from hardliners accusing Iranian Foreign Minister Mohammad Javad Zarif of selling out his country's interests and the White House from skeptics at home and abroad — particularly in the Middle East — who said the deal would keep Tehran's bomb-making capacities intact.
All-out lobbying by Israeli Prime Minister Benjamin Netanyahu against the agreement also was unsuccessful. Warning that Iran has not given up its nuclear ambitions, his office urged world powers Saturday to respond harshly to any violations of the deal by Iran.
Without that, "Iran will think it can continue to develop a nuclear weapon, destabilize the region and spread terror," the statement said.
___
Associated Press writers Ali Akbar Dareini in Tehran and Josef Federman in Jerusalem contributed
---From Yahoo News: The U.N. nuclear agency certified Saturday that Iran has met all of its commitments under last summer's landmark nuclear deal, crowning years of U.S.-led efforts to crimp Iran's ability to make atomic ... ---... 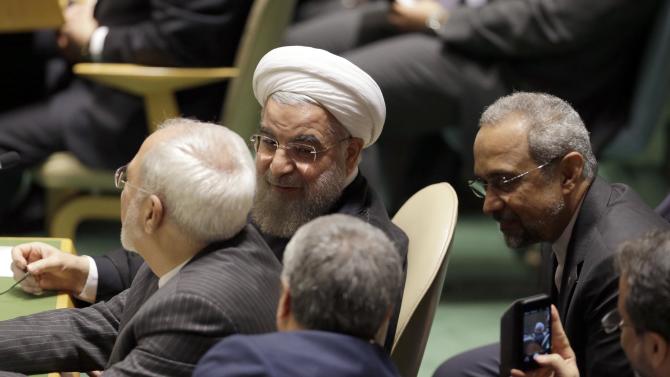