By Barry Neild, CNN
(CNN)With international sanctions on their way out, the world is running out of excuses not to visit Iran.
One look at this collection of images is going to pile on even more pressure to get there quick.
They're taken by Iranian photographer Mohammad Reza Domiri Ganji, who made a name for himself with a collection of gorgeous, intricate shots of Iranian mosques.
We asked Ganji to guide us to his favorite Iranian places, and show us the scenes he captured along the way.
Iran marks its national day on February 11, a date that celebrates the 1979 Islamic revolution that set the country on a path to sanctions.
It's a day likely to stir mixed emotions, but there's one thing that is certainly worth celebrating -- the beauty of this fascinating country.
Ali Qapu, Isfahan
Located on the western edge of Isfahan's Naqsh-e Jahan square, this six-story palace's name means "grand doorway."
Built during the 16th- to 17th-century reign of Shah Abbas I, it includes a red-colored "music hall," named for the tuneful echoes of its jar-shaped wall decorations.
"The unique and gloriously repetitive stucco ornaments and special architectural style left me no choice but to stare at the ceiling and try to photograph it as best as I can," says Ganji.
"I stood exactly in the middle of the music hall and took the photo from above my head with a wide-angle lens."

* * * Aali Qapu Palace, Imam Square, Esfahan Iran;
Arg-e Karim Khan, Shiraz
The 18th-century Karim Khan citadel stands in the center of Shiraz.
Inside there are residential quarters, baths and a courtyard filled with citrus trees. Outside, Persian-style crenelated walls are decorated with beautiful paintings and miniatures.
"The unique architecture, lighting and patterns presented in the Iranian baths catches the eye at first glance," says Ganji.

* * * Borj-e Azadi, Tehran
Built in 1971, the Azadi tower became an icon of Iran's capital city, Tehran, and remained so even after the city's vast Milad tower was built in 2009.
It was created by architect Hossein Amanat under direction from Iran's last queen, Farah Pahlavi, to mark the 2,500th anniversary of the Persian Empire.
"I like this tower for its unique architecture," says Ganji. "I've always tried to choose subjects that are symbolic, so that I may project their greatness through photography and the Azadi Tower is a perfect example.
"In this instance I used a fisheye lens to give the tower a unique effect. The presence of the clouds also helped."

Badab-e Surt natural springs have been formed over thousands of years.

* * * Located in the north of Iran, this natural spring produces water rich in salts and sulfur.
"It has a reflection of the sky that adds to its charm and beauty," says Ganji.

* * * This 19th-century carpet merchant's house in Kashan today serves as the base of the city's Cultural Heritage Organization.
"The house has aesthetic significance because of the molded ornaments and paintings created by distinguished 19th-century painter Kamal-ol-Molk," adds Ganji.

* * * Carpet-making is one of the oldest and most important industries in Iran, says Ganji.
The floor coverings are famous worldwide for their quality and designs.
Ganji's photo is taken in a carpet repair workshop in the city of Shiraz.
He adds: "I tried to capture the spirit of life which exists in this workshop and its workers. Every carpet brought here to be repaired has a spirit too."

* * * The 18th-century Dolat Abad garden follows a classic Iranian design, divided into two sections.
The outer part includes gardens and beautiful spaces that can be seen from the entrance.
The inner portion represents the Iranian architectural concept of family privacy.
This building has a distinctive windcatcher -- a roof tower used for ventilation and natural air conditioning in desert areas.
"The applied symmetrical molding ornaments and colorful glasses in this edifice are exceptional," Ganji says.
"But what really grabbed my attention was the windcatcher. There's a pool in the middle of the building and when wind flows over it, the water evaporates and cools the environment."

* * * This building stands in Tehran's 19th-century Golestan Palace complex and was the location for the 1896 coronation of the Qajar dynasty Persian ruler Mozaffar-ad-Din Shah Qajar.
"The exclusive ornaments of this building, such as the glasses, the mirrors, and tall columns are of exceptional beauty," says Ganji.
Eram Gardens, Shiraz

* * * One of the most famous historical gardens in Iran, these grounds and the building within them were built in the mid-13th century, but renovated 600 years later.
Eram owes its fame and importance to botanical gardens that are home to a variety of unique and rare plants.
"As I walked into the gardens, the first thing I noticed was the positive energy emanating from the place due to its green and colorful surroundings," Ganji says.
"It wasn't just the plants. The grand building also had me in awe due to the vast range of colors and patterns used and its unique architecture.
"More striking was the lake feeding small streams that water the gardens.
"I tried to find a way to capture the building and its surrounding trees, and their reflection in the lake
"In order to enhance the light and color of the scene, I took the photo during sunset."
Eram Garden, Eram Blvd, Shiraz Iran;

* * * Shiraz has a reputation as a city of great poets and poems.
"This photo shows a building where anyone can pen verses and hang them on the wall -- their own creations or an old favorite," says Ganji. "It's also a place for drinking tea and smoking hookah.
"When you enter here, it's interesting to read the different poems written with different handwriting."
Jameh Mosque, Yazd
This mosque is said to belong to the 15th- to 16th-century Timurid era because of its inscriptions and architectural style, but the main building could be centuries older.
Some believe it's built on an ancient fire temple.
"When I entered the mosque I was amazed by the fantastic artwork in its ceiling," says Ganji. "It got my attention and when I saw that view, I wanted to photograph it.
"The dome of the mosque has amazing arabesque patterns and four skylights that show geometric shapes beautifully.
"Quran verses written all around the dome add to its glory and beauty." 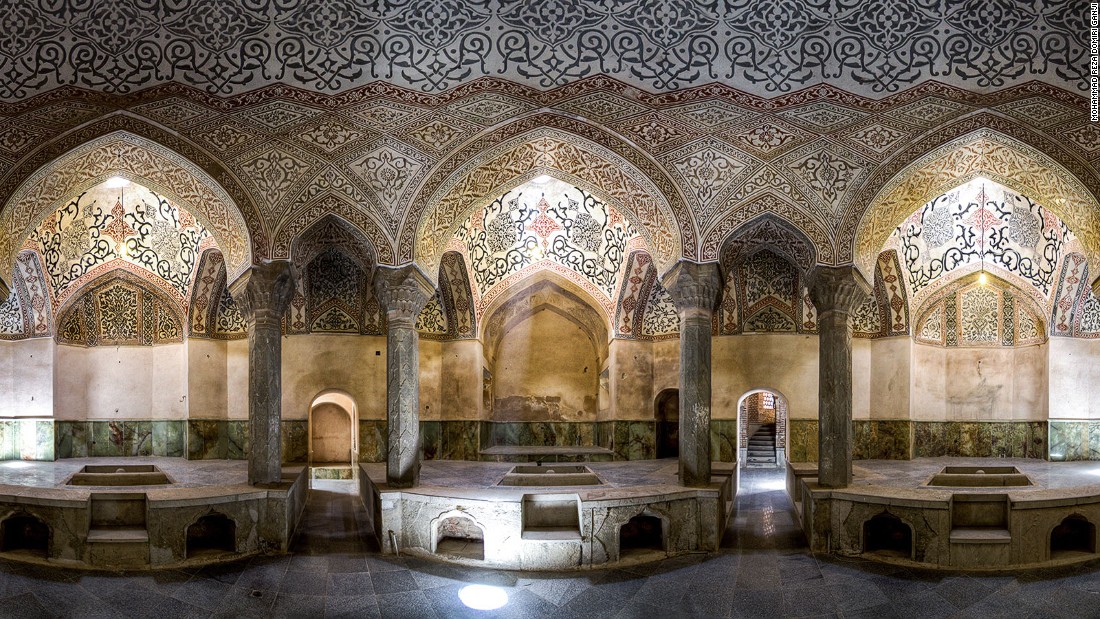 * * * Located in the southwestern Iranian city of Julfa, this bath was originally used by royals of the 16th- to 18th-century Safavid dynasty and later opened to the public.
Ganji says: "This photo shows the historical monument's 'Sarbineh', a vestibule, spring house, and greenhouse." 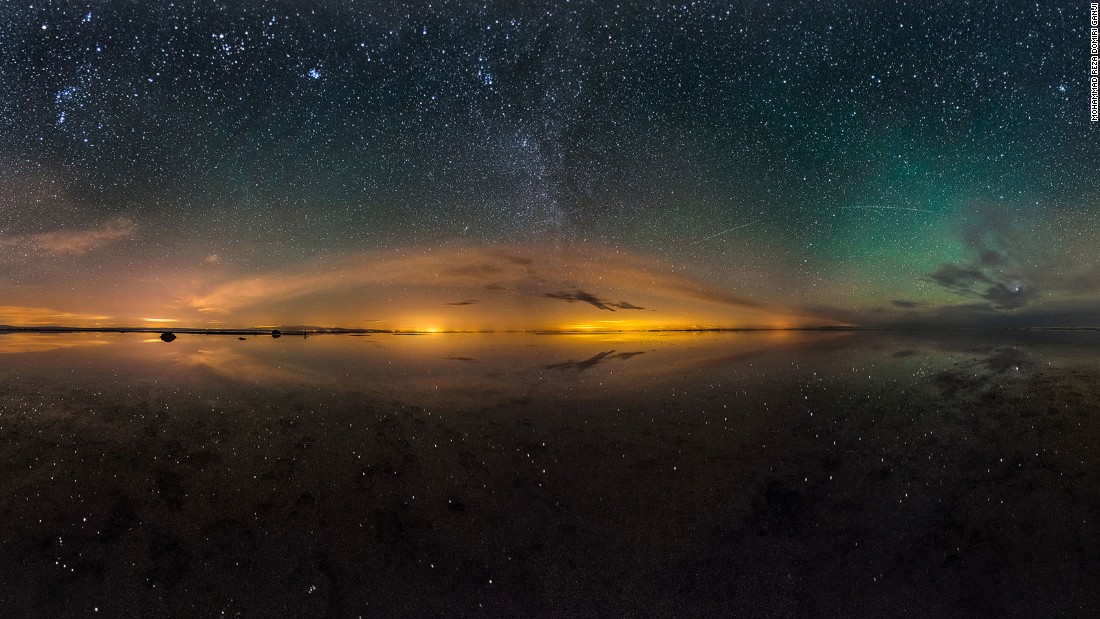 Is it safe to travel to Iran? Iran is not quite the scary place you th...