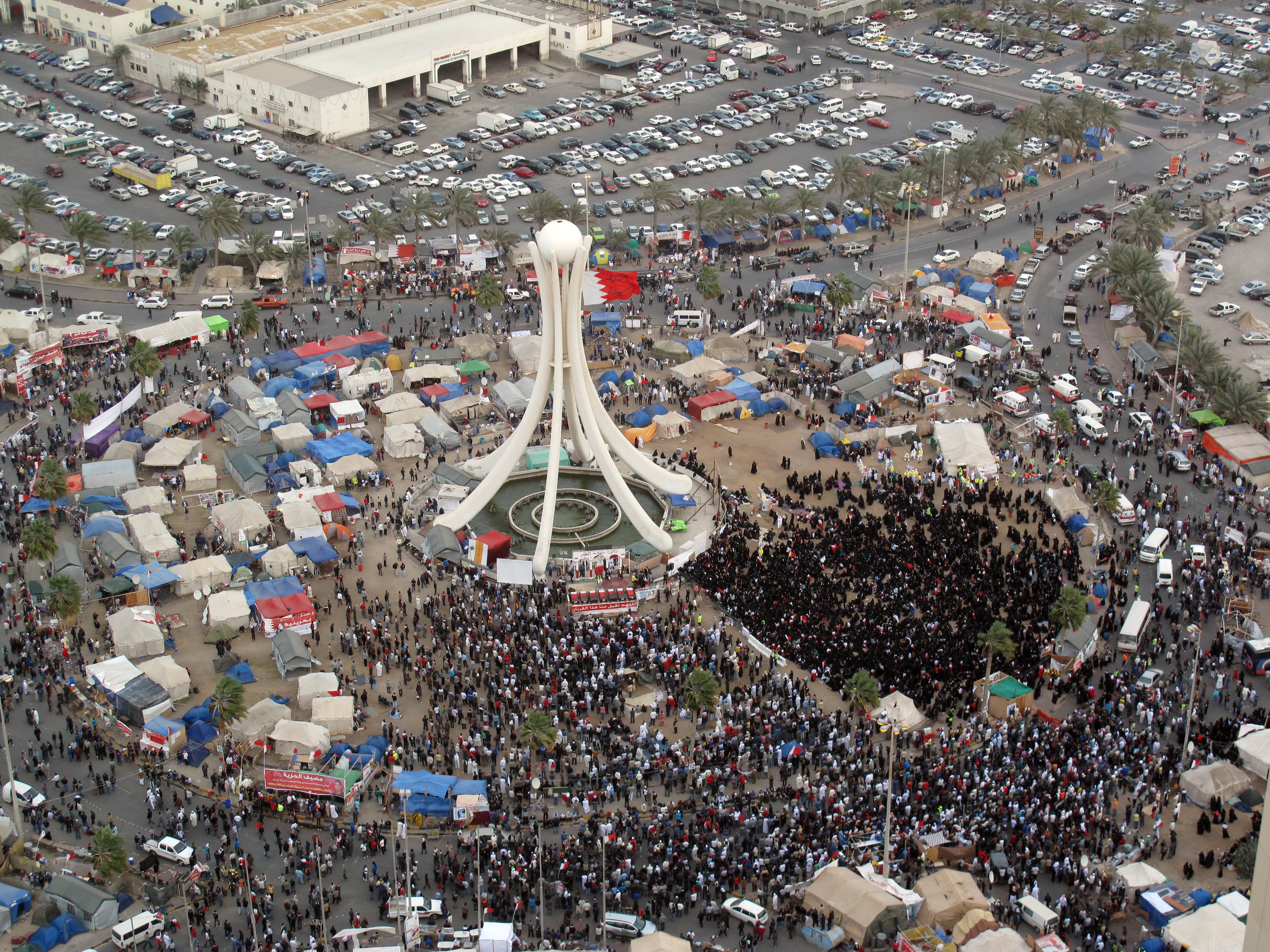 
By ETHAN BRONNERMARCH 18, 2011
MANAMA, Bahrain — Bahrain tore down the protest movement’s defining monument on Friday, the pearl at the center of Pearl Square. The destruction of the 300-foot sculpture, a stone pearl held by six sweeping arches, was part of a chain of events that in a matter of days turned the country from a symbol of hopeful pro-democratic protest into one of repression.
The official Bahrain News Agency reported the change as a “face-lift” to “boost the flow of traffic.” But Bahrain’s foreign minister, Sheik Khalid bin Ahmed al-Khalifa, said at a news conference, “We did it to remove a bad memory.” He added of the monthlong antigovernment rallies: “The whole thing caused our society to be polarized. We don’t want a monument to a bad memory.”
Pearl Square had become a tent camp with free food and a carnival atmosphere modeled on Tahrir Square in Cairo. But Bahraini troops forcefully cleared it on Wednesday. In removing the sculpture, the country cost itself a landmark designed to honor the six gulf states whose economic life was based, before oil, on pearls. The six, including Bahrain and Saudi Arabia, make up the Gulf Cooperation Council — which sent in 2,000 troops in a show of force just before Bahrain’s own security forces moved to crush the protests.
Mr. Khalifa said the troops would stay “as long as they are needed to protect our country.” He said they were being kept away from direct contact with Bahrainis, serving in support roles at installations.
He defended the authorities’ actions over the last week as necessary because of “terrorist activity” and “sabotage” seeking to destroy Bahrain.
Continue reading the main story
Related Coverage
Whether the Pearl Monument’s destruction — coming after the rout in the square and arrests of opposition figures — represented a definitive death blow for the protest movement was unclear. But even as it was being removed, the funeral of one of the antigovernment activists killed this week offered a different kind of symbol.
First, we take Bahrain

* * * The family of Ahmed Farhan, 30, who was killed on Tuesday by security forces in Sitra, an activist Shiite village, was finally given his body. There were shotgun pellet wounds to his back and a gaping hole in his skull.
The day he died, martial law was declared, making it illegal to hold rallies. Still, 5,000 people came to help the Farhan family bury Ahmed. Sitra turned into a sea of raised fists and tearful wailing, piety and political indignation.
The Farhan family is poor, like many in Sitra and like many of the 70 percent of the country that is Shiite. Ahmed Farhan, who never married, lived with his family in a ramshackle structure around a courtyard, having lost his job as a fisherman some years ago.
His body arrived swathed in white cloth, the face exposed, the skull covered in netting to hide the wound. As it was slid from the van, there were shouts of “God is great!” The body was washed and placed in a coffin draped in the Bahraini flag and covered with his photographs.
“There is no god but God,” those watching chanted.
Prayers were recited. Men crowded the main street. Women, draped nearly all in black, stood to one side.
After praise of God and his prophet, the leader turned to insults of the Bahraini royal family. “Down with the Khalifas!” he shouted to thunderous repetition. “Occupation forces out! Death to the Saudis! Death to Khalifa! Freedom for Bahrain!”
They chanted: “With our soul and our blood, we will redeem you, O martyr.” A military helicopter circled high in the sky, and at the village entrance, troops and tanks awaited trouble. None came.
Nadim Audi contributed reporting.
--- ---
...