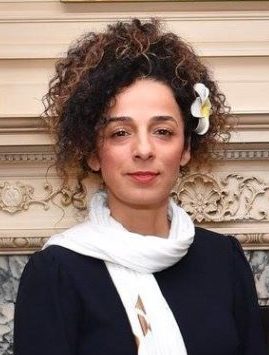 Masih Alinejad spoke critically of her native country’s autocracy. Now an Iranian intelligence official and three others have been indicted in New York.
By Benjamin Weiser
July 13, 2021
An Iranian American journalist living in Brooklyn who has been a sharp critic of the Iranian government was the target of an international kidnapping plot orchestrated by an intelligence network in Iran, federal prosecutors said Tuesday.
In an indictment unsealed in federal court in Manhattan, four Iranians were charged with conspiring to kidnap the journalist and author, Masih Alinejad.
Ms. Alinejad was not identified by prosecutors, but confirmed in an interview that she was the intended target of the plot. Last year, Ms. Alinejad wrote in a newspaper article that Iranian government officials had unleashed a social media campaign calling for her abduction.
The four defendants all live in Iran and remain at large, the prosecutors said, identifying one of them, Alireza Shavaroghi Farahani, 50, as an Iranian intelligence official and the three others as “Iranian intelligence assets.” A fifth defendant, accused of supporting the plot but not participating in the kidnapping conspiracy, was arrested in California.
The indictment describes a plot that included attempts to lure Ms. Alinejad, an American citizen, to a third country to capture her and forcibly render her to Iran. The intelligence official, Mr. Farahani, and his network used private investigators to surveil, photograph and video record Ms. Alinejad and members of her household in Brooklyn, the government said.
The extensive surveillance that Mr. Farahani’s network procured included the use of a live, high-definition video feed depicting Ms. Alinejad’s home, prosecutors said.
...
“This is not some far-fetched movie plot,” William F. Sweeney Jr., the head of the F.B.I.’s New York office, said in a statement.
Audrey Strauss, the U.S. attorney in Manhattan, said, “A U.S. citizen living in the United States must be able to advocate for human rights without being targeted by foreign intelligence operatives.”
The indictment comes at a precarious moment in the fraught relationship between the United States and Iran.
President Biden late last month ordered airstrikes against Iranian-backed militias in Syria and Iraq, telling Congress that he acted to defend American military personnel and deter Iranian attacks. At the same time, the two countries are working toward a resurrection of a 2015 deal to limit Iran’s nuclear power.
Ms. Alinejad, who hosts a program called “Tablet” on Voice of America Persian, a U.S. government-owned broadcaster, has been harshly critical of the nuclear deal.
---
https://www.justice.gov/opa/pr/iranian-intelligence-officials-indicted-kidnapping-conspiracy-charges
Iranian Intelligence Officials Indicted on Kidnapping Conspiracy Charges
Iranian Intelligence Services Allegedly Plotted to Kidnap a U.S. Journalist and Human Rights Activist from New York City for Rendition to Iran

According to court documents, Alireza Shavaroghi Farahani, aka Vezerat Salimi and Haj Ali, 50; Mahmoud Khazein, 42; Kiya Sadeghi, 35; and Omid Noori, 45, all of Iran, conspired to kidnap a Brooklyn journalist, author and human rights activist for mobilizing public opinion in Iran and around the world to bring about changes to the regime’s laws and practices. Niloufar Bahadorifar, aka Nellie Bahadorifar, 46, originally of Iran and currently residing in California, is alleged to have provided financial services that supported the plot.

“Every person in the United States must be free from harassment, threats and physical harm by foreign powers,” said Acting Assistant Attorney General Mark J. Lesko for the Justice Department’s National Security Division. “Through this indictment, we bring to light one such pernicious plot to harm an American citizen who was exercising their First Amendment rights, and we commit ourselves to bring the defendants to justice.”

“As alleged, four of the defendants monitored and planned to kidnap a U.S. citizen of Iranian origin who has been critical of the regime’s autocracy, and to forcibly take their intended victim to Iran, where the victim’s fate would have been uncertain at best,” said U.S. Attorney Audrey Strauss for the Southern District of New York. “Among this country’s most cherished freedoms is the right to speak one’s mind without fear of government reprisal. A U.S. citizen living in the United States must be able to advocate for human rights without being targeted by foreign intelligence operatives. Thanks to the FBI’s exposure of their alleged scheme, these defendants have failed to silence criticism by forcible abduction.”

“As alleged in this indictment, the government of Iran directed a number of state actors to plot to kidnap a U.S.-based journalist and American citizen, and to conduct surveillance on U.S. soil - all with the intention to lure our citizen back to Iran as retaliation for their freedom of expression,” said Assistant Director Alan E. Kohler Jr. of the FBI’s Counterintelligence Division. “We will use all the tools at our disposal to aggressively investigate foreign activities by operatives who conspire to kidnap a U.S. citizen just because the government of Iran didn’t approve of the victim’s criticism of the regime.”

According to the indictment, Farahani is an Iranian intelligence official who resides in Iran. Khazein, Sadeghi and Noori are Iranian intelligence assets who also reside in Iran and work under Farahani. Since at least June 2020, Farahani and his intelligence network have plotted to kidnap a U.S. citizen of Iranian origin (Victim-1) from within the United States in furtherance of the government of Iran’s efforts to silence Victim-1’s criticisms of the regime. Victim-1 is an author and journalist who has publicized the government of Iran’s human rights abuses.

Prior to the kidnapping plot, the government of Iran attempted to lure Victim-1 to a third country in order to capture Victim-1 for rendition to Iran. In approximately 2018, Iranian government officials attempted to induce relatives of Victim-1, who reside in Iran, to invite the victim to travel to a third country for the apparent purpose of having Victim-1 arrested or detained and transported to Iran for imprisonment. Victim-1’s relatives did not accept the offer. An electronic device used by Farahani contains, among other things, a photo of Victim-1 alongside photos of two other individuals, both of whom were lured from third countries and captured by Iranian intelligence, with one later executed and the other imprisoned in Iran, and a caption in Farsi that reads: “gradually the gathering gets bigger... are you coming, or should we come for you?”

As part of the kidnapping plot, the Farahani-led intelligence network also researched methods of transporting Victim-1 out of the United States for rendition to Iran. Sadeghi, for example, researched a service offering military-style speedboats for self-operated maritime evacuation out of New York City, and maritime travel from New York to Venezuela, a country whose de facto government has friendly relations with Iran. Khazein researched travel routes from Victim-1’s residence to a waterfront neighborhood in Brooklyn; the location of Victim-1’s residence relative to Venezuela; and the location of Victim-1’s residence relative to Tehran.

The network that Farahani directs has also targeted victims in other countries, including victims in Canada, the United Kingdom and the United Arab Emirates, and has worked to procure similar surveillance of those victims.

As alleged, Bahadorifar provided financial and other services from the United States to Iranian residents and entities, including to Khazein, since approximately 2015. Bahadorifar facilitated access to the U.S. financial system and institutions through the use of card accounts and offered to manage business interests in the United States on Khazein’s behalf. Among other things, Bahadorifar caused a payment to be made to a private investigator for surveillance of Victim-1 on Khazein’s behalf. While Bahadorifar is not charged with participating in the kidnapping conspiracy, she is alleged to have provided financial services that supported the plot and is charged with conspiring to violate sanctions against Iran, commit bank and wire fraud, and commit money laundering. Bahadorifar is also charged with structuring cash deposits totaling more than approximately $445,000.

An indictment is merely an allegation, and all defendants are presumed innocent until proven guilty beyond a reasonable doubt in a court of law.